Book Review: Howard Pyle's "The Garden Behind the Moon"

How does one recommend a children's book about death? For, that is the subject of Howard Pyle's The Garden Behind the Moon. The question of how to explain mortality to a child is hardly an easy one, nor a task, I imagine, many parents relish, and yet, it's a necessary one. That being said, The Garden Behind the Moon is not the sort of book a child psychologist would be likely to recommend. It's too complex, too dense with layered meaning upon meaning. It seems to me that the fact of death has been too absolutely spurned from our modern life - few people die at home, among their families, and the loss of young people is regarded as a bizarre anomaly, as though modern medicine were capable of solving any health problem, which it is not. The assumptions that good health is normal, rather than desirable, and that a long life is natural, rather than determined by factors as variable as genetics, access to healthcare, and sheer luck, were not shared with us by the Victorians. Nor were such assumptions shared by Pyle, though in his case, any illusions he may have held in that regard must have been ruthlessly shattered when his young son died suddenly, while he and his wife were out of the country. Six years later, in 1895, Pyle published The Garden Behind the Moon, an allegory about the children that leave us while they are young. The Victorian cult around the child, innocent, angelic, vulnerable to death, and blessed above grown people, has left us few artifacts more powerfully persuasive than Pyle's novel.

The book, in exquisitely simple language, tells the story of David, a "moon-calf" who is teased and bullied by the other children because he is quiet and thoughtful, more interested in the imaginings of his mind than the mundane realities of life in his small village. He learns to walk the Moon-Path to the Moon-Garden after he meets with the Moon-Angel and it is there, behind the moon, that David is tested by an adventure that brings him to manhood, conquering the Iron Man and retrieving the Wonder Box and the Know-All Book it contains. The book is heartbreakingly wistful, permeated with a sense of deep loss, but David himself does not ever seem to feel that loss. In fact, he's rather passive for a hero. Even as a man, he remains beholden to older figures, whether it is Hans (the cobbler who shares his belief in the Moon-Garden), the Man-in-the-Moon, the beloved teacher who cares for the children who live in splendid happiness in the Moon-Garden, or the Moon-Angel himself.

The Moon-Angel is an angel of death, but also of renewal, and we witness him explicitly leading the souls of the dead to a shining white city, in an absolutely devastating scene David witnesses through the magical Moon-Window - a slave-woman dies on the ship carrying her to the market with her infant in her lap and she is thrown into the water, and her living baby, after her. The Moon-Angel goes to the bottom of the river to carry them up to the city and there is rejoicing, "for there is as much joy and gladness over one poor black woman who enters into that place as there is over the whitest empress who ever walked the earth of Christendom." This scene is crucial to the story, for it reveals one of the deepest facets of the book's philosophy: everyone's death matters and everyone's entrance into heaven is a joyous occasion, no matter a person's race, age, or gender. Everyone is vulnerable to death, men, women, and especially children, and even the monster David must face to complete his quest and become a man. Though the blunt wording (and the underlying assumption that most, wrongly, believe black lives matter less, if it all) shows the book's age - 120 years old as of this writing - the sentiment, that all people, of all races, deserve to be loved and celebrated makes the book feel surprisingly modern, especially when compared to other children's books of the era, such as E. Nesbit's The Phoenix and the Carpet, with its blatantly racist island of savages. The Moon-Angel loves all alike.

Though the symbology is Christian, the book rejects a strictly Christian perspective for one steeped in an erudite mythologized pantheism, much in consonance with Rudolf Steiner's theosophy, and influenced by medieval and chivalric ideologies, Greco-Roman myth, and the rather chilly sensuality of the Art Deco movement. The story of Adam and Eve is reconfigured; there is no tempting serpent, knowledge is obtained by the reading of the Know-All Book, and the expulsion from the Garden is the result of fear of suffering, rather than punishment. This is a Christianity that insists on forgiveness and rewards the brave pursuit of knowledge.

If the book has a flaw it is that Pyle is unable to be as cruel to his hero as perhaps he ought. David grows into a strong man of courage and completes his quest, winning the hand of the woman he loves from the time they are both children, but he himself never alters except in body. It becomes impossible by the end of the story to fully comprehend which is the realm of the living and which of the dead, which constitutes reality and which fantasy, whether David is alive, dead, or passed into some odd twilight stage betwixt the two. Perhaps Pyle was unable to face the death of David, when he had no choice but to face the death of his own son.

From the perspective of gender, the book is old-fashioned, but not as prejudiced as many of its contemporaries. There are three positive older male figures - Hans the cobbler, the Man-in-the-Moon, and the Moon-Angel - and three positive female figures - the teacher in the Garden, the old woman with the red petticoat (who explains the quest to David), and the Iron Man's cook, without whom David would not survive his quest. Thus, David looks up to both men and women. His love, Phyllis, is an ideal, and undeveloped, and yet, I see no reason why the gender of the two couldn't be reversed: one could simply change the names to Davida and Philip and the same story could be told, though in a pleasingly transgressive form, without alteration. The story is allegorical, though deeply complex and at times ambiguous to the point of obscurity, and David does not really have to represent an explicitly male protagonist.

Pyle is probably best known as an illustrator, rather than a writer, and a good edition should by rights include his ten full-page illustrations and the decorative headers for each chapter. The illustrations are unabashedly romantic, but drawn with a careful attention to realistic detail and texture. Here is a favorite example: 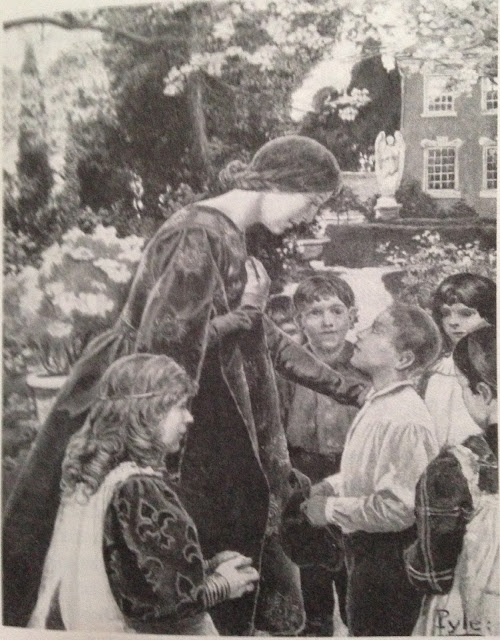 This beautiful book is unlikely to appeal to most children, but then, Pyle seems to recognize that. The book is for children like David, the moon-calf, children who don't make friends easily, children who dare to try to step onto a moonbeam and escape to the lands beyond our meager realities. For such a child, and especially for a such a child who has felt a deep loss, The Garden Behind the Moon is a rare and wonderful gem.
Posted by Gianna Ward-Vetrano at 2:57 PM