Wednesday Addams is a feminist for our times, a brainy, insightful paragon who never betrays her own needs and desires, least of all for a boy, unites the marginalized in an act of protest against conformism, classism, racism, ableism, and sexism, and makes use of her considerable intellect to preserve her family. She couldn't care less about looking conventionally beautiful, she couldn't care less about looking conventionally feminine, and she coolly dismisses all attempts on the part of others to change her appearance, attitudes, and goals. She's not going to smile unless she has a damn good reason to do so. 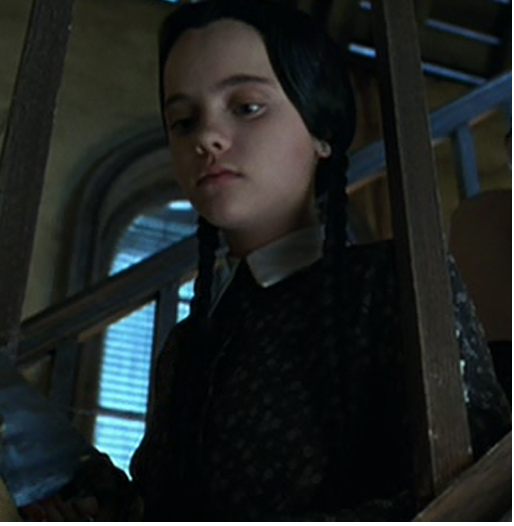 Wednesday is a rare character that bridges the demands of pop culture feminism - she's smart and still attractive, her rebellion is consciously intersectional - and more academic feminist critique - she is highly logical and adept at both research and making sense of psychology (also, she cross-dresses and plays Hamlet for her school play; Wednesday thinks nothing of gender-swapping). For example, in The Addams Family, Wednesday excels in school, but her teacher is concerned because Wednesday's hero, according to her essay, is Calpurnia Addams, burned as a witch for having "danced naked in the streets" and who also "enslaved a minister" - but not to worry, Morticia assures the blonde teacher, "we've told Wednesday, college first." Wednesday's hero, or rather heroine, is a woman who chose to throw off all social conventions and inverted gendered power dynamics, subjugating a man. That being said, those ambitions won't get in the way of attaining a B.A., preferably majoring in Spells and Hexes.

The brilliant Thanksgiving pageant in Addams Family Values is a cathartic and subversive revolt against white, upper-class American values, values that exclude oddballs like Wednesday and Pugsley, but also Jews, like Wednesday's crush Joel Glicker, Hispanics, African-Americans, the disabled, and the overweight. The pageant is intended to depict a white-washed version of Thanksgiving in which the white Pilgrim hosts are the condescending, passive-aggressive hosts and the Native Americans (played by the campers who are Addamses, not white, disabled, and overweight), led by Pocahontas, compliment the very blonde, very blue-eyed, milk-complexioned Sarah Miller as they smile and accept their status as savages. Wednesday is having none of it. Her speech is worth quoting in its entirety:

Wait, we cannot break bread with you. You have taken the land which is rightfully ours. Years from now my people will be forced to live in mobile homes on reservations. Your people will wear cardigans, and drink highballs. We will sell our bracelets by the road sides, and you will play golf. My people will have pain and degradation. Your people will have stick shifts. The gods of my tribe have spoken. They said do not trust the pilgrims. And especially do not trust Sarah Miller. For all these reasons I have decided to scalp you and burn your village to the ground.

"White meat and dark meat, take it away" indeed. Wednesday unequivocally rejects the simplistic version of American history that views colonialist interaction with Native Americans as essentially benevolent and paternalistic. Her critique is rooted in an anti-materialist and anti-capitalist discourse, owing something to Marx, but also couched in a language that recalls Malcolm X. This is vengeance delivered against the powers of the rich, vengeance for a long history of greed, marginalization, disenfranchisement, and oppression. Wednesday's attack is also cleverly staged; she pretends to agree to play the insipid Pocahontas as written for the pageant, quietly making her arrangements and taking both personal and political revenge.

Wednesday is also independently-minded when it comes to dating. She takes full control of the budding romance with Joel. It is she who initiates physical closeness. She asks him to go with her to Uncle Fester's wedding (though, granted, she won't refer to it as a date) before Joel has the guts to ask her out. Finally, her first relationship is a misandrist triumph, when, informing Joel that Uncle Fester's Black Widow lover wasn't sick but sloppy, she proceeds to demonstrate how she would get rid of a husband: she would scare him to death. This subversively dark quality opposes the simplicity of the sunny, have-it-all feminism of Lean In, the relentlessly positive feminism that neutralizes anger as purely an expression of trauma, to be overcome with a personal essay.

Wednesday stays true to herself through it all, without ever giving into the slightest bit of insincerity or yielding to the exigencies of social conformity or familial expectation. She's successful largely because of this quality, because she simply won't fit into the crowd that doesn't fit her, or second-guess her own gut instinct, or give up when a wee trick or two might always change the tide in her favor. Forget the Disney princesses - the feminist role model every little girl needs is Wednesday Addams.

Posted by Gianna Ward-Vetrano at 11:18 AM